Why do we still use road salt and what are the alternatives? 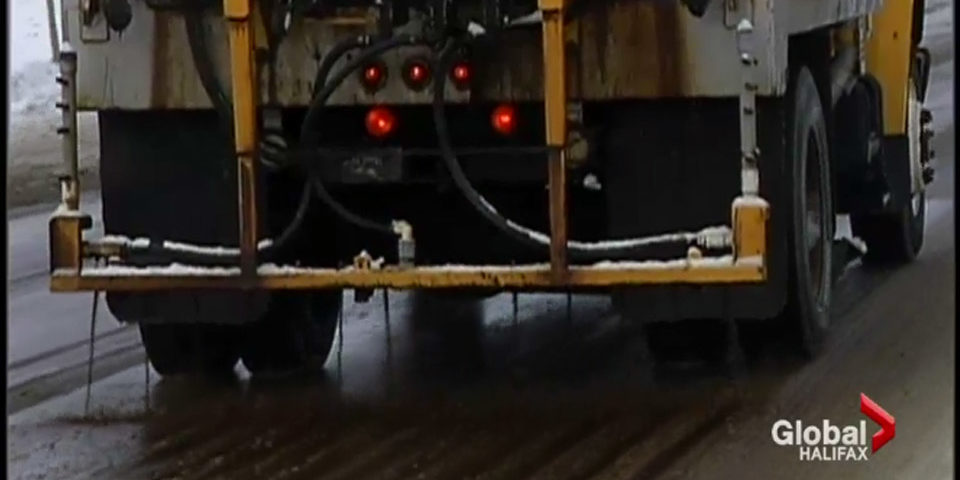 Every year cities across the country spread millions of tonnes of road salt to combat the frigid, icy conditions of a Canadian winter.

A video that went viral last week showed Vancouver residents in the midst of a frenzied rush to gather free salt being distributed at a fire hall.

And while Canadians turn to salt to prevent slipping or traffic collisions stemming from icy surfaces, there’s a growing body of research that highlights the devastating impact road salt can have on our environment, bridges, roads and buildings. It can also be harmful to pets and even ruin a good pair of shoes.

Carl Kuhnke, a transportation and infrastructure expert with the University of Saskatchewan, says road salt helps speed up the corrosion of rebar inside concrete. Salt corrosion has been cited as a contributing factor in the degradation of bridges in Quebec — like Montreal’s Champlain Bridge — and is one reason for the crumbling state of Toronto’s Gardiner expressway.

An inquiry into the 2012 collapse of the Algo Centre Mall in Elliot Lake heard how decades of water and salt penetration caused severe rusting of its steel support structure before it collapsed.

So why then do Canadian municipalities, cities and provinces turn winter after winter to sodium choloride? Because it’s cheap.

“It’s really a matter of cost benefit,” Kuhnke said. “Anything above the 45th parallel will use some variation of sodium chloride to provide more friction on the roads.”

Environment Canada says the total amount of salt spread across the country fluctuated between 1.5 and four million tonnes between 2004 to 2015 depending on the severity of the winter weather.

Kuhnke said salt is only effective to around -18 C and after that the only other tool to help keep cars on the road is sand, which is used more by cities in the Prairies and northern parts of Canada that experience icy temperatures.

“The cleanup costs and what to do with the aggregate and the gravel that you pick up off the roads every spring is almost as bad as salt,” he said.

There have been several reports examining the environmental impact of road salt on ecosystems including one from Environment Canada. The 2001 report that found impacts on wildlife, plants, water and soil were so distressing that Environment Canada considered adding road salt to the country’s list of the most toxic substances.

“It’s the most cost-effective de-icing material and it’s not supply limited so there is usually an adequate supply of salt,” said Claire Oswald, an assistant professor of geography at Ryerson University in Toronto.

Oswald said most municipalities are working to address the environmental issues but more needs to be done to educate commercial property owners — especially big box stores and parking lots.

“The last thing they want to do is to get sued, understandably they don’t want anyone to get hurt, so they put down a ton of salt,” said Oswald. “You can get concentrations that are higher than seawater coming off some of those parking lots. All of that water is flowing straight into the storm sewer system … and those go directly into the stream and in Toronto they go directly into [Lake Ontario]. I don’t know that people fully absorb that.”

Here is a look at alternatives governments in Canada and the United States are using or have used in place of sodium chloride.

Municipalities from coast-to-coast and in the U.S. have been using beet juice on roads before snow arrives or mixing the juice in with salt to make their de-icing processes more effective.

The sugar from beet water helps salt work in temperatures near the -30 C mark and can help salt stay on the roads, reducing run-off. When sprayed before a storm, a thin layer of beet juice keeps ice from bonding to a road’s surface.

“It prevents snow and ice from forming if you get out in front of a storm,” said Kuhnke. “But it can be hard to store, mix and put into trucks.”

Williams Lake in northern B.C., parts of Quebec, and Toronto have been using products like Beet 55, a mixture of saline, sugar and beets, when temperatures plummet below -20 C.

In Wisconsin, local governments have teamed up with dairy companies to use cheese brine — a byproduct of making mozzarella and provolone — to reduce their salt usage when de-icing roads. In New Jersey, state officials sprayed sidewalks and streets with pickle juice in 2011. A CBS report showed the salty green liquid melts snow as efficiently as salt, and costs a whole lot less and is better for the environment.

“These [brines] have chloride compounds in them naturally,” said Kuhnke. “They actually interact with the pavement to go into the porous parts of the pavement so the snow and ice can’t collect.”

Cheese brine has a freezing point of -29 C, lower than regular salt water, which can freeze around -21 C.

Researchers in the Netherlands are working to create a green de-icing salt made from biomass sources like roadside grass or kitchen waste.

The biomass produces an organic salt called calcium magnesium acetate, which is a powerful but costly de-icer. Dutch scientists are hoping to develop this “green salt” on a large scale by 2020.

In 2009, city crews in Ankeny, Iowa, used a mixture of dried garlic and table salt to de-ice its city streets, while also filling the air with a garlic aroma.

A local spice factory found itself with 18,000 pounds of surplus garlic salt that it donated to the city which was used on its 400 miles of roads.