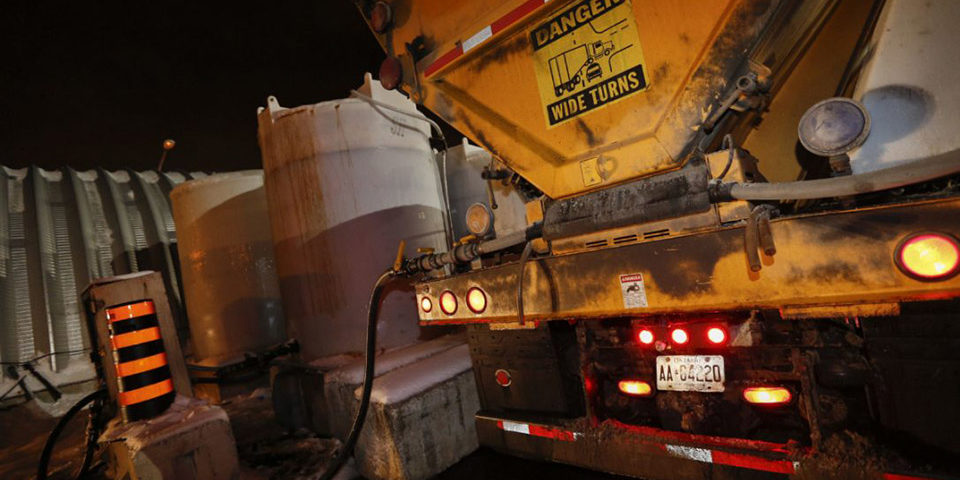 Molasses from sugar beets, refined and sprayed on roads, can help melt ice at temperatures as low as -32 C — with less environmental damage.

Nothing beats a beet in bad weather.

On Tuesday, Toronto’s salt trucks will be rolling out across the city spraying salt covered with beet juice to help roads melt in the frigid temperatures.

The method is only used when the thermometer drops below -20 C, the point at which salt alone becomes useless. The beet concoction is good until -32 C.

“When it starts getting really cold, that’s where the sugar beet really shines,” said Tony Vaccari, a manager at Eco Solutions, which manufactures Fusion Liquid De-Icer, the product the city uses.

The city used it last week when temperatures fell below that critical point, according to Peter Noehammer, head of Toronto’s transportation services. On Monday crews were busy prepping the trucks with the brown liquid.

Toronto has been using a beet solution for years, Noehammer said.

The city’s salt trucks are already equipped with containers that are normally filled with brine — a salt-water solution — that sprays on the rocks of salt as they come out. That brine is replaced with the beet juice.

The city won’t spray every road with the stuff because it’s about four times more expensive than salt. But they’ll hit strategic parts of the city, such as hills and bridges, where ice is most likely to cause problems.

The sugar beet, which looks like an obese, white carrot, has long been one of the workhorses of the sugar industry. When sugar is mined from the beet for the food industry, molasses is left over.

But the molasses is useless, as you might expect in January.

“When it comes to us it’s thick, a little less than syrup,” Vaccari said. “It’s not pumpable and not really usable by anyone.”

Eco Solutions takes the molasses at its Milton facility and runs it through an “alkaline degradation process” that thins it out and gives it a better “melt value.”

The beet business has been booming of late, Vaccari said, with municipalities and other users such as condominiums looking for better alternatives to salt.

It is an organic product that some have called environmentally friendly.

“We don’t like saying it’s better for the environment than salt, but you can drink our product,” Vaccari said. “I’ve drunk a lot of it during presentations. I mean, it doesn’t taste very good — it’s really bitter.”

Vaccari said cities from Hamilton to London to Niagara are using the product on their roads regularly, which has resulted in significantly less use of salt — upwards of 60 per cent less in some cases.

Road salt is a prime enemy to the ecosystem, said Angela Wallace, of the Toronto and Region Conservation Authority. She doesn’t know much about the beet product, but anything that reduces chloride in water and soil is beneficial to the environment.

“Indirectly we see a decline in fish health and communities” from road salt, said Wallace, adding that the density of roads correlates to poor health among the fish, bug and plant populations — one of the big culprits being salt used on those roads.

“Beet juice has gained attention, since there’s been a higher emphasis placed on environmental impact because of road salt,” Noehammer said. “And in this case it has the added benefit of working at very cold temperatures.”

And that’s why nothing beats a beet in bad weather.